The above chart shows all of the flood days in Portland, Maine from 1920 to 2017. I gathered this data from NOAA and created this chart using Google Chart Javascript API. All charts on this page were developed using this API.

This page is better viewed in landscape mode when visiting using a mobile device:

A recent study by Bamber Et Al. states that coastal regions should be preparing for at least 6.5 feet of sea level rise by the end of 2100. I wanted to visualize this information geographically, to see just how devasting it could be for a coastal city. I gathered available data and fired up ArcGIS. I fell in love with Portland when I lived there the year after graduating college, so it was an easy choice for the focus of this project. Portland has already seen strong flood events during intense rain storms and Nor'easters. The interactive chart above displays the increase of flood events in Portland over time.

The greater Portland Area is home to over half a million people and is Maine's economic capital. Portland is a major seaport and is the second largest oil port along the east coast. Portland's economy relies heavily on the port, which could be dramatically impacted from rising seas. I set out to analyze how many buildings, parcels, and roads could be affected by the proposed sea-level rise. Portland has fantastic beer, so I added the location of several major breweries in downtown Portland to see if they would be affected.

I collected data from the Maine office of GIS and NOAA to create the map on the left and the maps seen throughout this project. I digitized the parks myself. The hillshade was created using a DEM from USGS 3DEP program (1/3 arc sec). I also gathered building footprints that Microsoft created and released free for public use. I also figured that this project would be a fun way to test out css's position sticky. Shout out to the Pudding for motivation.

After running the model, I organized the statistics I gathered from the feature classes into a table. It was clear that overall damage drastically increases at the 6 feet Sea-level height.

The 6,8, and 10 feet sea-level rise maps can be found below with their respective statistics. Buildings impacted are shown as red, roads impacted are shown as yellow lines, and the parcels impacted are depicted as no fill polygons with black outlines. I found a table on Maine's GIS page that held estimated parcel land value and building value, so I joined those fields to the parcels using a unique identifier. The price values are included in the statistics below and in the charts near the end of the page. 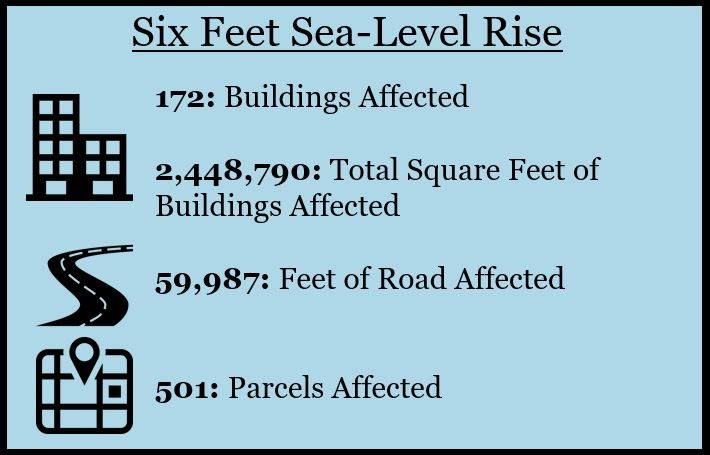 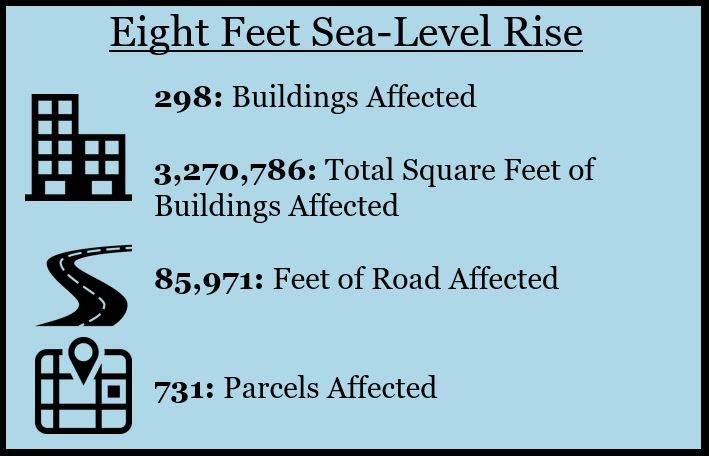 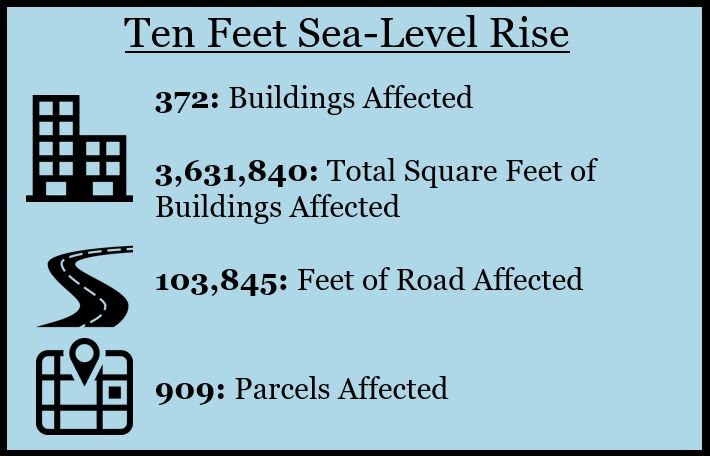 The two charts above show the damage statistics for the 2-10 feet sea-level rise. Below is a GIF I created depicting the rising sea in Portland at each of the different levels included in the analysis. I added the 5 foot level to the GIF to show the jump in damage that exists at the 6 foot sea-level rise. The 5 foot level shows similar damage to the 4 foot sea level rise. This project did not include flood potential or storm surge events at each of these sea levels. Inundation events will most likely continue to increase as sea-level increases, as is depicted in the chart at the top of this page.

Back To GIS Projects